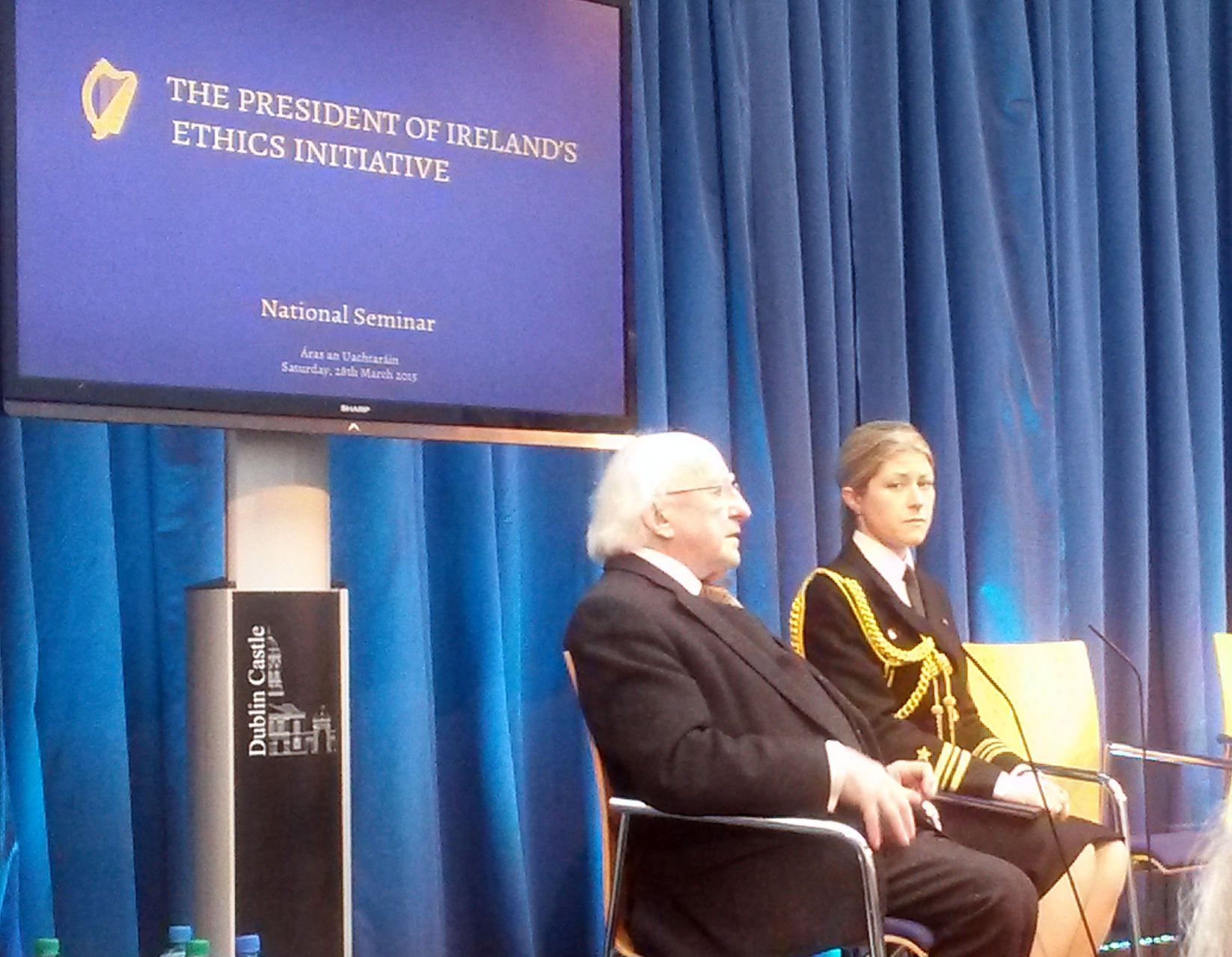 “International ethics is a difficult business – in fact most world leaders take an interest in it once they have left office.” This was one of the opening gambits of an insightful, visionary speech which Michael D Higgins, the Irish President, gave at a seminar I attended on Saturday. It was the culminating event of his year long ‘Ethics Initiative’ which has involved people up and down the country of Ireland in an examination of the values we want to shape our society. The event was attended by around 130 leaders of different sorts from across Irish institutions, including NGOs, all faiths, academics and business leaders. All of them have been involved in the Ethics Initiative in some way in the course of the past year. It was one of the most inspiring, hope-filled days I have attended in a long time. And to think that there, right in the middle of it, sitting at a round table as ‘one of us’, was the President of Ireland. It is remarkable. I can’t think of any other country where it would happen.

The Office of the President in Ireland gets a lot of stick. I get the feeling sometimes that people do not really see the value in a constitutional President. People are quick to point to the weaknesses, the lack of power, the fact that the President has to spend most of his time cutting ribbons and hosting garden parties. What people often fail to see is the creative power that this kind of President can have in terms of the well-being of the nation – on issues that are much deeper than day to day political cut and thrust. Issues that speak to our common sense of being a nation, our common humanity like ethics. Like previous outstanding presidents before him who have championed human rights, Michael D is also making his mark. His way is perhaps a ‘slow burner’ – but through his ethics initiative, his intellect, his capacity to communicate complex messages and his convening power is making waves. I am sure it will generate a rich harvest.

One thing I really admire about President Higgins, which was evident again yesterday, is the dogged way in which he sticks to his core message (which happens to be an analysis I share whole heartedly!) In his speech he talks about the way in which mainstream economics is based on flawed assumptions about human beings. He spoke of the way in which the wide spread acceptance of this flawed conception of economic theory has resulted in many problems we see today. The ‘invisible hand’ may be questioned nowadays, but in fact we are increasingly seeing what Michael Taillard calls an ‘invisible fist’. I can certainly see evidence of this in the way that transnational finance and commerce is penetrating into every sphere of policy and life here in Ireland. The Transatlantic Trade and Investment Partnership or TTIP, which has been in the news this week, is just one example.

Yesterday’s seminar was very enlightening and I just wish we had more time to get to know all the people who were there. It feels like we just started the conversation. Issues discussed ranged from the instrumentalisation of our esteemed seats of learning, the role of taxation in cementing solidarity, the need for inter-religious dialogue on ethics, to the need to rediscover our ‘moral imagination’. It was so interesting to hear from all the groups who have taken the President’s initiative seriously and started their own conversations about ethics at a local level – like University College Cork’s ‘communities renewed‘ project and the ‘peoples’ conversations‘ hosted by Dochas and the Wheel.

Of course the big question is where to take these conversations? How do we turn them from a nice day out into change? Inevitably, the discussion gravitated towards the political system. On the one hand, the absence of opportunities for genuine participation in decision-making… and on the other hand, an electorate who can seem (in focus groups at least) to be only interested in their own self-interest. The issue of the need for more visionary political leadership came through very strongly. Should politicians pander to the PR focus group mentality or demonstrate leadership? Focus groups are deeply flawed. If I’m honest, I would probably focus on very local issues myself – things that matter to me and my family – but that does not mean that the bigger society, and indeed the world doesn’t matter to me! We need bold, visionary leadership to marry both. As Michael D said at one point during yesterday’s conversation “You don’t actually have to be engaged in a good act to enjoy a good society. There is something wonderful about also being an onlooker, and gazing in wonder at goodness in society. There is a value in that.” Valuing social bonds is central to that. As journalist Olivia O’Leary said in her conclusions: “Goodness, softness, forgiveness, mercy are words we have forgotten in Europe.” Lets hope conversations like these can start to bring them back.

So thank you, President Higgins! Thank you for convening the ethics conversation with such grace and dogged persistence. Thank you the opportunity to part-take in such an inspiring day. As you said, it is just a ‘punctuation mark’ – and it is over to us to multiply the ‘ethics initiatives’ across the country.

Lorna Gold works for Trócaire, the Irish Catholic Development Agency. She is a specialist in International Development who has worked in an academic and NGO context for almost two decades. For ten years she headed up Trócaire’s Policy, Research and Advocacy team. Currently, she is leading a project on how the Irish Church can implement Pope Francis message on integral ecology, articulated in Laudato Sí. She writes and speaks extensively on Pope Francis’ vision and was responsible for chairing an all-female panel at the launch of this encyclical in the Vatican with world-renowned author, Naomi Klein in 2015. She holds a PhD in Economic Geography from Glasgow University and as well as working for Trócaire, lectures in Applied Social Studies in Maynooth University. She has published widely, being the editor and author of numerous books, journals, policy reports and academic papers. She is a regular contributor to public debate in Ireland and internationally on climate justice and helped co-found ‘Stop Climate Chaos’ Ireland in 2006. She is vice-chair of the Global Catholic Climate Movement and a member of the Irish Government’s Advisory Group on the national Climate Dialogue. She is originally from Scotland and is married with two children. Her most recent book entitled “Climate Generation – Awakening to our Children’s Future”, will be released in June 2018 by Veritas. Inspire deeply by Pope Francis, it tells the story of a mother and activist awakening to the plight of the next generation. Recent publications of note: 2018, Climate Generation: Awakening to our Children’s Future, Veritas 2017, ‘Laudato Sí – A Dangerous Book’, essay in ‘Laudato Sí – An Irish Response’, Sean McDonagh ed. , Veritas 2017, Ethical Investments in an Era of Climate Change - A Guide to Reviewing Environmental and Social Governance of Catholic Investments, Tróciare and GCCM. View all posts by lornagold

One thought on “In Gratitude to our President”

The story so far…